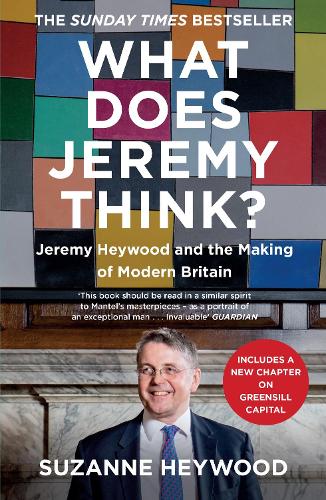 What Does Jeremy Think?

Jeremy Heywood and the Making of Modern Britain

From the first day that I started work at the Health and Safety Executive I was asking restless questions like ‘what is the point of doing that?’ and ‘does it actually have an effect on anything?’ That is my economist training, which I combine with an assumption that things can be improved – and it is how I have approached my whole career.

As a young civil servant, Jeremy Heywood’s insightful questioning of the status quo pushed him to the centre of political power in this country for more than 25 years.

He served directly four Prime Ministers in various roles including as the Principal Private Secretary to the Prime Minister, as the first and only Permanent Secretary of 10 Downing Street, the Cabinet Secretary and the Head of the Home Civil Service. He was at the centre of every crisis from the early 1990s until 2018, and at most of the key meetings. Invariably, when faced with a new policy initiative a Prime Minister’s first response would be: ‘but what does Jeremy think?’

Jeremy worked up until his death, retiring just a few days before he died from lung cancer in October 2018. This book began as a joint effort between Jeremy and his wife Suzanne – working together in the last months of his life, with much of it completed in hospital treatment rooms and with Jeremy’s full involvement including prompts by text message of the questions to be asked of ministers and former colleagues. Suzanne completed the work after his death.

In a time of political uncertainty, this extraordinary book follows the experiences of a great modern public servant and offers an unforgettable account of crisis management, of change and of how to push through reform. Built from Jeremy’s own memories, his papers and over 200 interviews with others closely involved in his work through those pivotal years in British contemporary history, it shows viscerally and in real
time the extraordinary contribution made by the civil service. And it celebrates Heywood’s life in the beating heart of UK politics, and a man who for so long was the most powerful non-famous name in Britain.