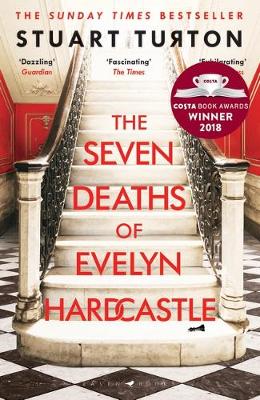 The Seven Deaths of Evelyn Hardcastle

Somebody’s going to be murdered at the ball tonight. It won’t appear to be a murder and so the murderer won’t be caught. Rectify that injustice and I’ll show you the way out.’

It is meant to be a celebration but it ends in tragedy. As fireworks explode overhead, Evelyn Hardcastle, the young and beautiful daughter of the house, is killed. But Evelyn will not die just once.

Until Aiden – one of the guests summoned to Blackheath for the party – can solve her murder, the day will repeat itself, over and over again. Every time ending with the fateful pistol shot.

The only way to break this cycle is to identify the killer. But each time the day begins again, Aiden wakes in the body of a different guest. And someone is determined to prevent him ever escaping Blackheath…

‘Original’, ‘unique’, ‘fiendishly clever’ and ‘remarkable’: critics have been knocked for six by Stuart Turton’s mind-blowing take on the country house thriller. The setup – a murder, a set of assembled guests – seems familiar, but the execution is anything but. Simply unmissable.