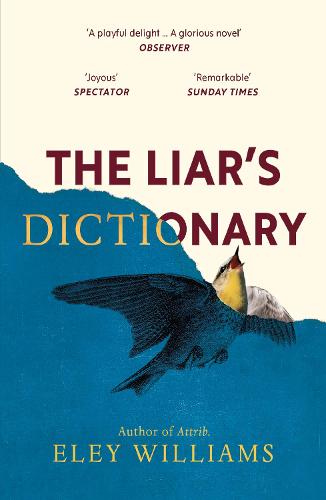 Reserve a copy of The Liar’s Dictionary for collection at Hart's Books. If you provide your email address below, we will contact you when this item is ready for collection. For delivery by post add the address to the order notes and we will be in touch to arrange payment.

mountweazel, noun: a fake entry deliberately inserted into a dictionary or work of reference. Often used as a safeguard against copyright infringement.

In the final year of the nineteenth century, Peter Winceworth has reached the letter ‘S’, toiling away for the much-anticipated and multi-volume Swansby’s New Encyclopaedic Dictionary. Overwhelmed at his desk and increasingly uneasy that his colleagues are attempting to corral language and regiment facts, Winceworth feels compelled to assert some sense of individual purpose and exercise artistic freedom, and begins inserting unauthorised, fictitious entries into the dictionary.

In the present day, young intern Mallory is tasked with uncovering these mountweazels as the text of the dictionary is digitised for modern readers. Through the words and their definitions she finds she has access to their creator’s motivations, hopes and desires. More pressingly, she must also field daily threatening anonymous phone calls. Is a suggested change to the dictionary’s definition of marriage (n.) really that controversial? What power does Mallory have when it comes to words and knowing how to tell the truth? And does the caller really intend for the Swansby’s staff to ‘burn in hell’?

As their two narratives combine, Winceworth and Mallory must discover how to negotiate the complexities of an often nonsensical, untrustworthy, hoax-strewn and undefinable life.

The Liar’s Dictionary explores themes of trust and creativity, naming the unnameable, and celebrates the rigidity, fragility and absurdity of language. It is an exhilarating debut novel from a formidably brilliant young writer.