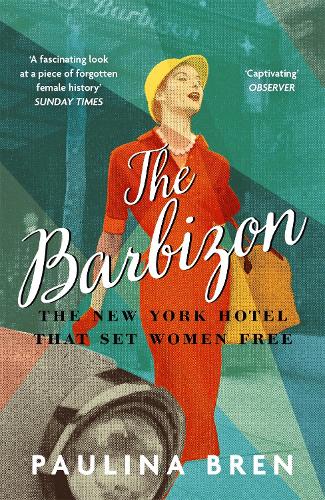 AS HEARD ON RADIO 4 WOMAN’S HOUR
‘Captivating … a brilliant many-layered social history of women’s ambition and a rapidly changing New York’ Observer
‘A fascinating look at a piece of forgotten female history‘ Sunday Times
‘A treat, elegantly spinning a forgotten story of female liberation, ambition and self-invention’ Guardian
‘A deeply researched history, leavened with gossip … offers a full sweep of the changing status of American women in the twentieth century’ TLS

WELCOME TO THE BARBIZON, NEW YORK’S PREMIER WOMEN-ONLY HOTEL
Built in 1927 as a home for the ‘Modern Woman’ seeking a career in the arts, the Barbizon became the place to stay for ambitious, independent women, who were lured by the promise of fame and good fortune. Sylvia Plath fictionalized her time there in The Bell Jar, and over the years, its 688 tiny floral ‘highly feminine boudoirs’ also housed Joan Crawford, Grace Kelly (notorious for sneaking in men), Joan Didion, Candice Bergen, Charlie’s Angel Jaclyn Smith, Ali MacGraw, Cybil Shepherd, Elaine Stritch, Liza Minnelli, Eudora Welty, The Cosby Show’s Phylicia Rashad, Grey Gardens’s Edith Bouvier Beale, and writers Mona Simpson and Ann Beattie, among many others. Mademoiselle boarded its summer interns there – perfectly turned-out young women, who would never be spotted hatless – as did Katherine Gibbs Secretarial School its students – in their white-gloves and kitten heels – and the Ford Modelling Agency its young models.

THE BARBIZON is a colourful, glamorous portrait of the lives of the young women, who — from the Jazz Age New Women of the 1920s to the Liberated Women of the 1960s — came to New York looking for something more.
‘The story of the Barbizon is in many ways the story of American women in the twentieth century’ Economist
‘Illuminating . . . this vivid, well researched account is testament to its vibrant history and the women who made it such a powerhouse‘ Daily Express